Jay (or Mr Myasthenia Kid as you know him) have been struck down with the lurgy. I am not as ill as I was at the start of the year when I had a chest infection and sinusitis. But it is pretty close. For that reason there will be no blog post this week - it hurts to even tap on the keyboard.

I will leave you with my gorgeous pup Dembe, who despite me feeling as rough as a badgers arse still makes me smile. 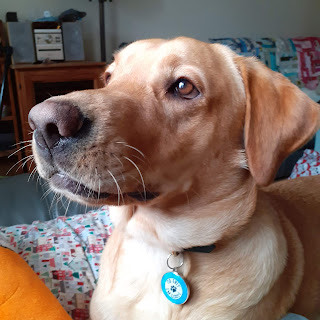 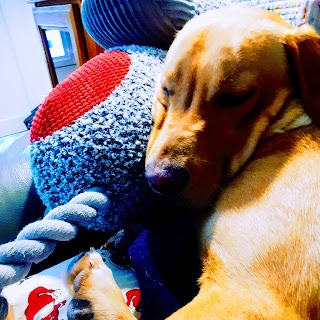 Posted by The Myasthenia Kid at 06:00

I absolutely understand how much you can love your dogs. I lost mine almost ten years ago, a goofy Wheaten Terrier named Rufus and because of Work and commuting I didn't have time for another dog being out of the house, sometimes for up to twenty hours out of the day. Rufus had been a gift for my daughter on her twelfth birthday so she was home with him when I wasn't splitting time between her mom's house and mine. When he died she was graduating from college and on her way to grad school in Europe, so my house felt very empty. I still mourn him from time to time. In early March of 2017 I was diagnosed with Myesthenia Gravis (which is the reason I happened upon your blog)and have been unable to return to work since. It was about a month after my 57th. birthday. I can't remember the last time I was sick before that, when I had to go out on disability the company told me that I hadn't taken a sick day in twenty seven years.
I had been working a ton of overtime for almost four years running so I chalked the symptoms up to being exhausted, but I was at work one day and my vision went screwy and my right eye just closed on me. To make a long story short, over the next several months I went from being a work horse no nearly dying. I started IVIG infusions and was prescribed Prednisone, I also had a Thymectomy. The Prednisone triggered what can only be described as the worst case of shingles in history, but I guess they all feel like that when it's you. Then, just as the shingles was healing (I still have the post-therpetic pain), I collapsed with Pulmonary Embolism in both lungs that the ER Doctor thought should have killed me. And all that was just from March to September. By the end of the year it became apparent that I was going to be unable to return to work so I retired, and one day I was having lunch with a friend of mine (a big time animal lover), and she told me about a friend of her's who was looking for a home for his mother's dog. The woman had had a stroke and was diagnosed with Alzheimer's. she couldn't take care of the dog, Maggie, anymore and for about a year, she had been passed from family member to family member and to a few friends as well but for one reason or another no one could keep her. So I went to see her and she came right up to me and looked at me as if to ask for help, so she came home with me and I love her dearly. We spend every day together she is even welcome at the infusion center.
It's a hard thing that we outlive our dogs, I still miss dogs I had as a child; but there are so many that need a loving home. I promise you it gets better and I wish you many happy years with your new little guy.

Hi,
thank you so much for reading my blog and taking the time to leave a comment.

Thank you also for proving that I am not the only one who loves their dogs as much as I do and mourns them passing. This week is tough as it is leading up to the two year anniversary of losing Willow, Mollies daughter and Frankie's sister. Her passing was quick and out of the blue. So it came as a real shock. I don't think we had the time to mourn her properly as we lost some people that were close to us shortly after so 2018 was a bit of a blur ( she passed December 15th 2017 ). It worked out there was 55 weeks between having three dogs and having none, losing Mollie & Frankie within 7 days of each other was awful. Dembe brings us so much joy. He has his own unique character that we still feel like we are getting to know.

I am so glad that you have Maggie in your life now. She was obviously destined to be yours after her owner could no longer care for her.

It sucks that dogs are only with us for such a short period of time. But they shower us with a lifetime of love in that small period, that we can never forget.