I thought I would do a lighter post for a change, plus I am still pretty wiped out after contracting shingles. The rash is almost gone now but the virus launched a full-out assault on my body.

For quite a few years I have been collecting Emma Bridgewater Pottery. I blame my mum as until she told me about it, I had never heard of it. My collection started off with just the one mug and has exploded since then. Initially I collected mugs, most of the time I used them rather than keeping them on display. In December I accidentally clicked on an Emma Bridgewater group on Facebook whilst looking for something else. I call it fat finger syndrome. Unfortunately it has been an expensive but enjoyable mistake. I have also managed to get hubby into it, which is great as now he takes great pride in our collection and cleans it on a regular basis. Our lounge has never been so tidy.

It started off after Christmas when we had some money as presents. We decided this year we would buy ourselves something nice after all the shit we had both been through during 2016. 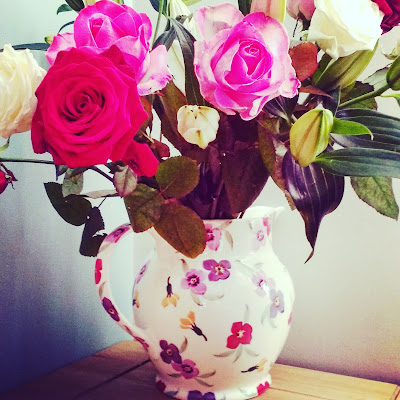 The great thing about the jug is that now hubby buys flowers for me or it every two weeks as it looks so beautiful with a bouquet in it. I have never has so many bunches of flowers bought for me since it arrived. We first discovered the wallflower pattern when we got a personalised mug for our friend (and adopted daughter - that’s a running joke as she could be our daughter due to our age. Quite handy too as her mum and dad did the hard work bringing her up. She calls Jay Dad and me Mum which can be confusing for people who don’t know us.) I actually wasn’t 100% sold on the design but when Imogen opened it, it was so pretty we fell in love with it.

When Imogen’s mug arrived we were also sent a catalogue, I had been eyeing up the Christmas Nativity Plates and the matching mugs but couldn’t justify the price. In the sale the price was greatly reduced and as I bought seconds rather than firsts it was cheaper again (seconds have minor flaws). 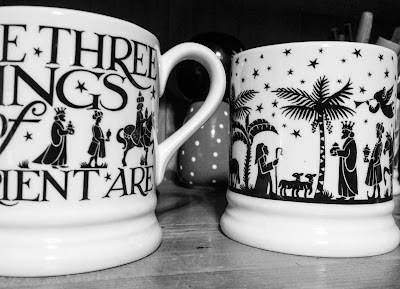 I posted this photo of the mugs on Instagram and Emma Bridgewater got in contact with me asking if they could use the photo on their social media. I was chuffed to bits as I studied photography for about six months at University. It was an optional part of the media studies part of my degree and I really enjoyed it. 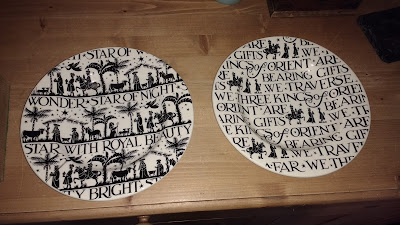 The plates I also loved but again couldn’t justify the price before the sale. I picked up a real bargain.

After seeing the plates / mugs / jugs hubby was well and truly captivated. He was now also looking at the sale site and earmarked a few items he liked. As we would be celebrating 20 years of being a couple on February 14th 2017, he wanted to mark the occasion. He decided this would be a fantastic way to celebrate. 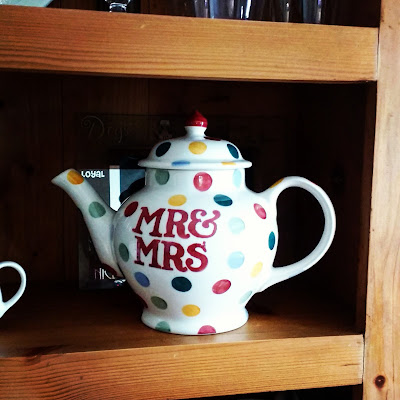 For some reason Jay and I both love having personalised mugs. In the days after our friend passed away we were lost. To cheer us both up I bought us a personalised cocoa mug each as we both like drinking humongous cups of tea. The cocoa mugs hold about ¾ of a pint, which is brilliant and it reduces how many cups I need to make.

I got Jays in a pattern called Polka Hearts. He was chuffed to bits when his arrived

We don’t collect specific patterns but whatever takes our fancy, its more of a magpie approach but we love it. It is something that we both can share and enjoy together


Posted by The Myasthenia Kid at 06:00 No comments:

Firstly let me apologise for there being no blog post last week, it’s the first time in a couple of years that there hasn’t been a post published.


The last week has been pretty tough for me both emotionally and physically. Shingles has kicked my butt before contracting shingles I was pretty naive about it thinking it was just a painful rash. I couldn’t have been more wrong, it has wiped me out completely. I feel constantly as if I am at the tail end of a nasty dose of flu, exhausted no matter how much I rest / sleep and just pretty sorry for myself. I am also suffering from nerve pain which runs from my back to under my right breast, which has been intensifying over the last few days.  From the various websites I have read I can look forward to feeling shitty  for 4-6 weeks.


Also last Wednesday was our friend's funeral, I am glad we attended and got to say goodbye but the grief again has hit me like a sledge hammer. I was left pretty low on Thursday and it’s a feeling that won’t shift. There is an Andrew shaped hole in everyone who ever met him lives, that will never be filled.


I have been trying to rest and recuperate ever since. Presently I have lost my blogging mojo, I am hoping as I begin to get over Shingles it will return. I just need to learn to pace myself and remember I have been “normal” sick on top of chronically sick so hence the very short blog post.

The last week has been tough, actually that’s a wild understatement if ever I have made one. Last week was awful, due to all the stress and emotion it kicked off my PoTs symptoms into a new dimension and my EDS pain has been up through the roof. I have had awful palpitations on changing positions, even rolling over in bed has done it. I have been feeling faint a lot of the time too which has meant I have had to be really careful on standing. To top it all off though I managed to contract Shingles on Tuesday.


I had been feeling very run down, hot and achy for a few days. On Tuesday when I went to jump in the shower I suddenly got the urge to scratch my back. As I scratched I felt a series of bumps, I tried to get a look in the mirror to see what was going on but just couldn’t see, so went and had a look in my bedroom mirror. There was a line of 7 raised bumps some of which looked like blisters but again it’s difficult to see your back properly. So I asked hubby to come and take a photo with my phone so I can see. Unfortunately hubby is in denial about needing glasses so the photos he took were awful but I could make out there was a very red raised rash in a line. Hubby still denies he needs his eyes tested.


I did what most of us do these days and had a look on google. Within a few seconds I had found an image that corresponded with what the deeply out of focus photo was showing me. It was also corresponding with one of the locations shown as being a prime spot for shingles. I then decided to ignore it, only the itching was driving me mad. I took my temperature and unusually for me I was running a temperature. Again I ignored this as I just didn’t want to deal with it. I was having a bad day with my head, the first in over a month, so was struggling with sitting up and the pain it was causing. I didn’t want to ring the duty doctor and then find out I was going to have to take a trip to the surgery. I didn’t want to have to sit up in the waiting room not knowing how long it would be until I would be able to lie down again.


In the end after cajoling by my mum  (with hubby telling me it was just a line of spots and it wasn’t red - cheers love) I gave in and rang the surgery. Just ten minutes later I was rung back and ten minutes after that I was in the doctor’s consultation room. The doctor roared with laughter when I told her that my husband had told me it wasn’t red and it was just a line of pimples. She said it’s scarlet and they aren’t pimples they are blisters. Within a minute of looking at my rash, she confirmed it was indeed shingles. I was warned it will get worse before it gets better and also that I can’t be around pregnant women that have never had chickenpox, young children that haven’t had chickenpox and people that have a compromised immune system. Thankfully I don’t have contact with anyone who falls into those groups, with being pretty much housebound.

So now I am taking horse pill sized antiviral medication, feeling grotty and the rash has extended a little and is now looking like sunburn. Hence the very short post this week. The antiviral meds are hopefully going to knock it on the head as I have managed to start them very early. It’s just unfortunate that they are making me nauseous and have given me a slight headache. After seeing some pretty horrendous photos on Google yesterday I think I have got off incredibly lightly.
Posted by The Myasthenia Kid at 06:00 No comments: